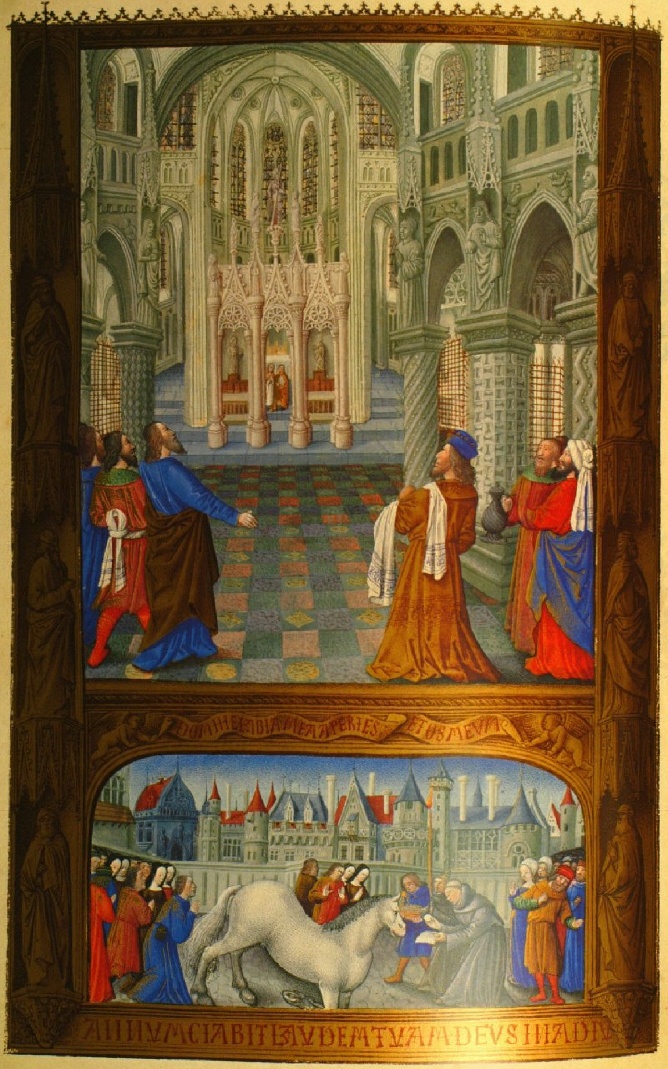 The manuscript of Les très riches heures is undeniably one of the most sumptuous and splendid books ever created. Written in a beautiful, even hand, richly embellished with decorated initials, and magnificently illuminated by the most gifted artists of the late Middle Age, it has been designated by experts as one of the most famous of all works of art. 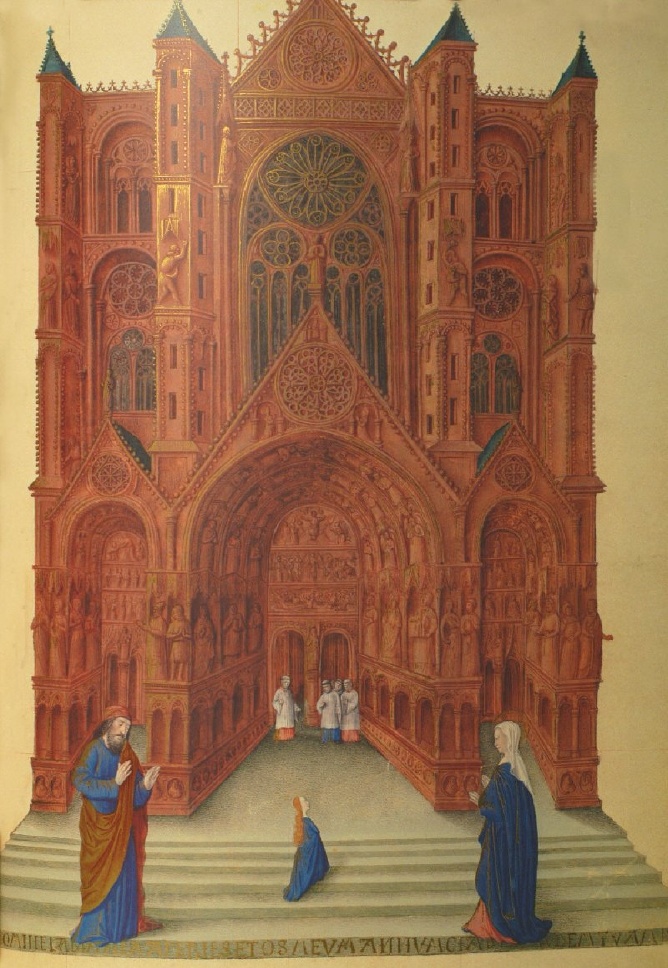 This manuscript, "The Very Rich Hours of the Duke of Berry" is a livre d'heures, a "Book of Hours". Developing out of the Psalter and the Breviary, the Book of Hours was a prayer book for private devotion of the laity, with a Latin text. Unlike the Breviary, it was much more personal in character since it could include extra-liturgical prayers. These prayers and meditations were meant to be recited at those moments of the liturgical day traditionally called "hours". 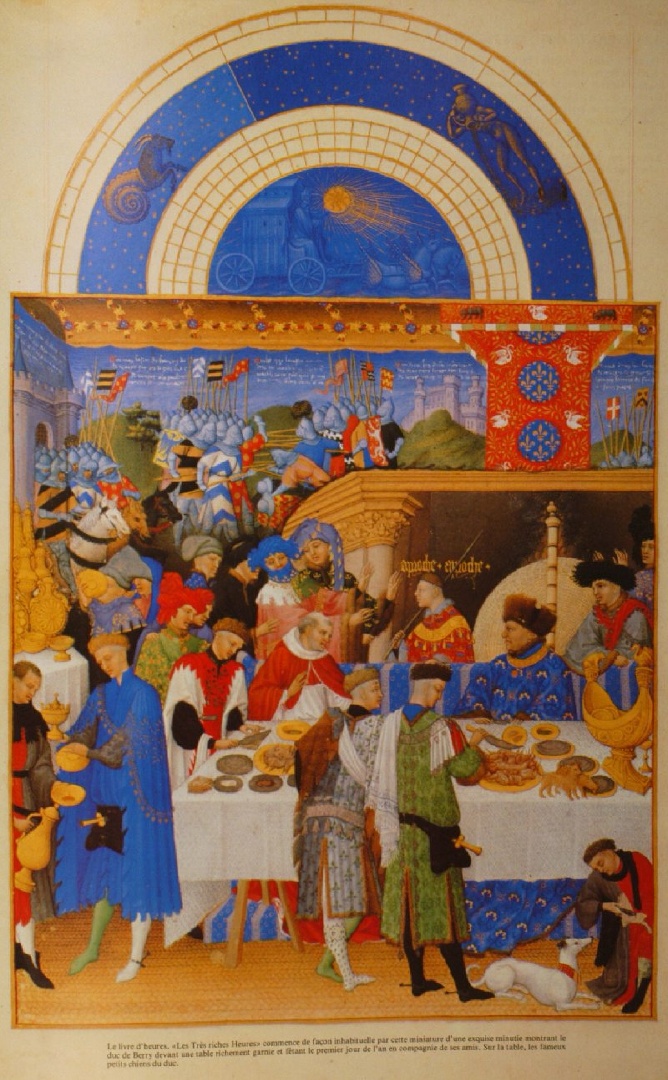 The illustrations of a Book of Hours usually began with calendar miniatures, followed by scenes from the life of the Virgin Mary and from the Passion of Christ, concluding with representations from those saints favored by the book's patron. The splendor and beauty of these miniatures gradually came to overshadow the text of prayers. Thus Books of Hours developed into objects of great aesthetic value, and became so popular that they outnumbered, by the fifteenth century, all other categories of illuminated manuscripts. 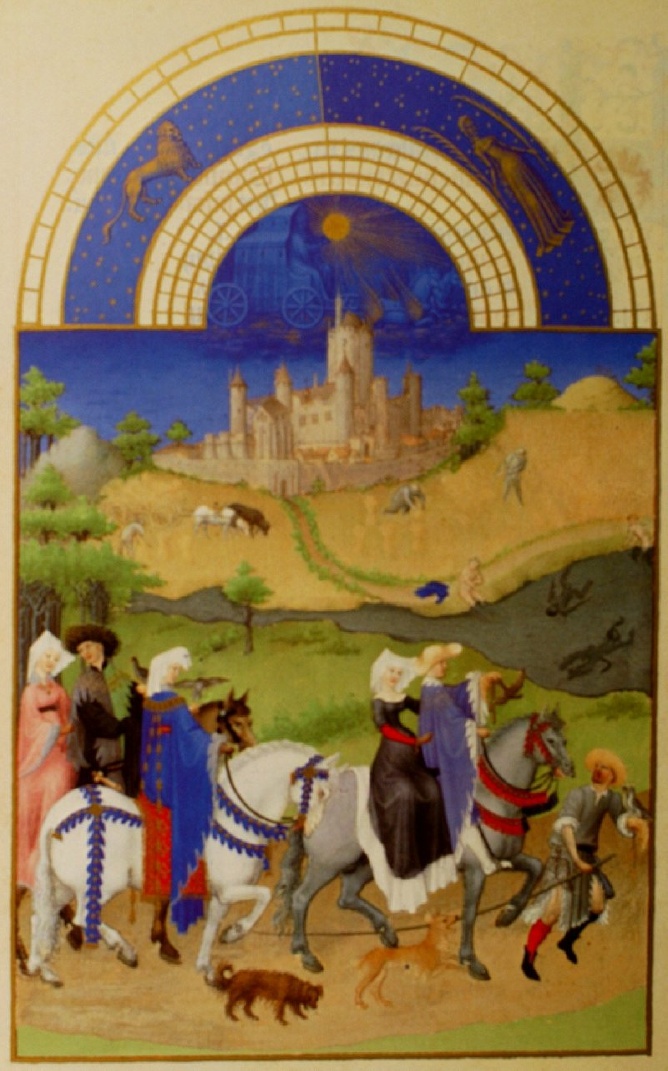 About the year 1410, Jean, the Duc de Berry, entrusted Paul Limbourg and his brothers, Hermann and Jean, with the illumination of the Très riches heures. The final result, though not completed by the Limbourgs, was a 416 page manuscript, with 131 exquisite miniatures lavishly decorated with gold and silver, and 216 pages containing 300 gold initials, which brimmed with ideas. Never before had a prayer book been illuminated with such magnificent full-page miniatures, depicting scenes in the life of the court and the surrounding countryside. The realism of the architectural setting is arresting, the boldness of design unprecedented in any other manuscript of the period. The subtle balance of color and the elegance of the drawings enhance the beauty of these miniatures, enchanting the viewer with their poetic charm. 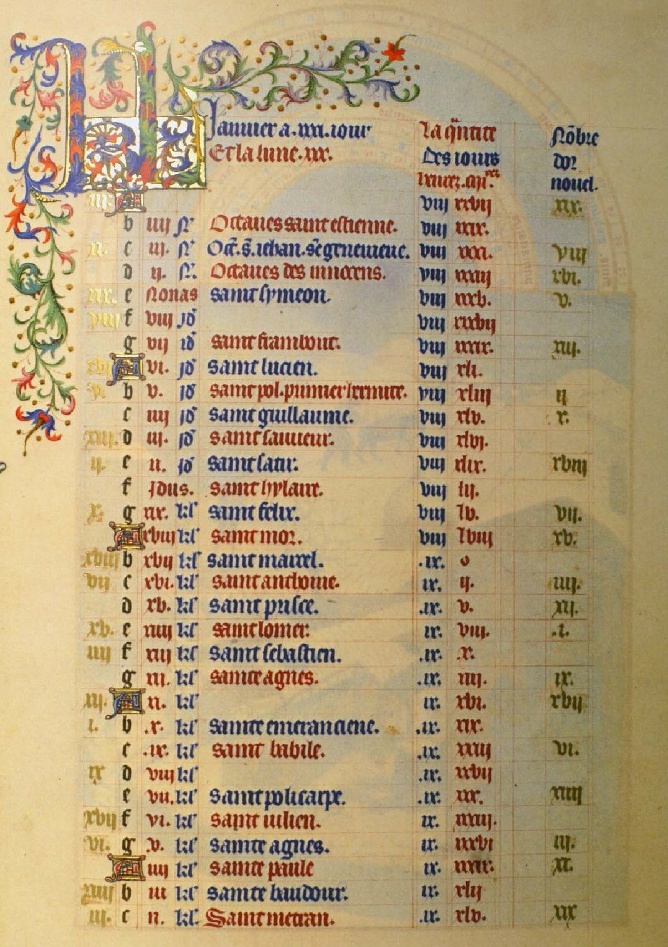 Jean, Duc de Berry, was born in 1340, the third son of King John the Good of France. His brother Charles became King Charles V of France, and his brothers, Louis and Philippe, became the Dukes of Anjou and Burgundy respectively. He was responsible for the building and restoration of numerous luxurious estates and castles. His personal collection included jewelry, works wrought in gold, tapestries, and panel paintings. The Duc de Berry's magnificent library included many religious books: 14 Bibles, 16 psalters, 18 breviaries, 6 missals and no less than 15 books of hours. The centerpiece of the collection, the Très riches heures, was described, in an inventory of his estate compiled after his death in 1416, as "...a very rich Book of Hours, executed by Pol and his brothers, richly historiated and illuminated. Appraised at 500 pounds..." An extraordinary amount for an unfinished work, the book was then transferred to the Duke of Savoy, for whom it was completed about 1485 by Jean Columbe. Subsequently, the work changed hands several times, and in 1856 it was acquired by the Duke of Aumale. The Duke added it to his collection at Chantilly, where it has remained ever since. 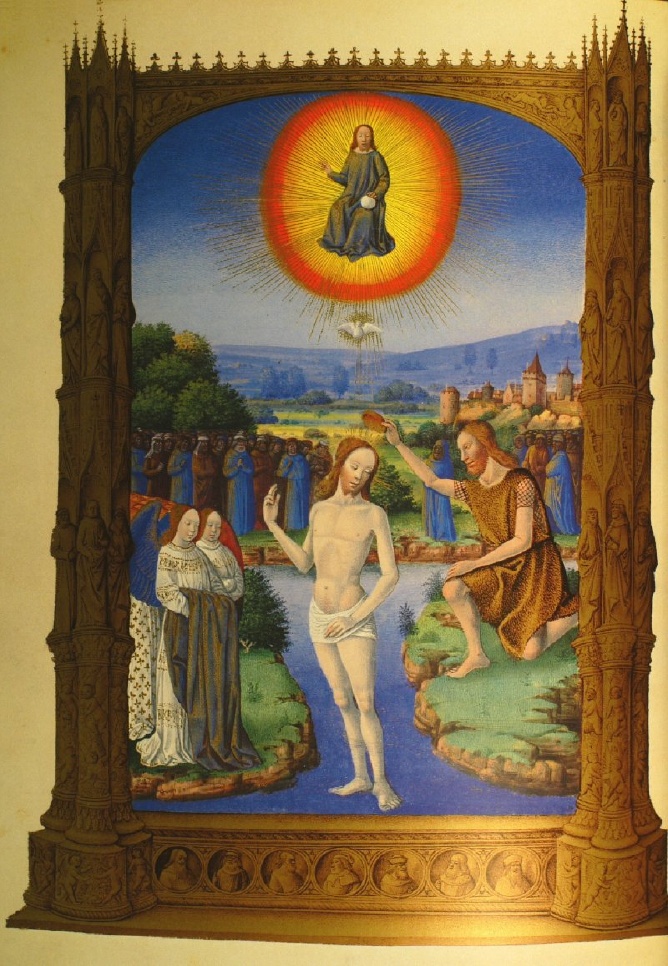 Originally the Duc de Berry and the Limbourgs decided on a classical design of full-page miniatures with three to four lines of text at the bottom of the page and smaller miniatures the width of the columns. Later, the miniatures were enlarged and separated from the text. A number of these full-page miniatures contain subjects not ordinarily found in a Book of Hours, such as an "Anatomical Man" or a "Plan of Rome". 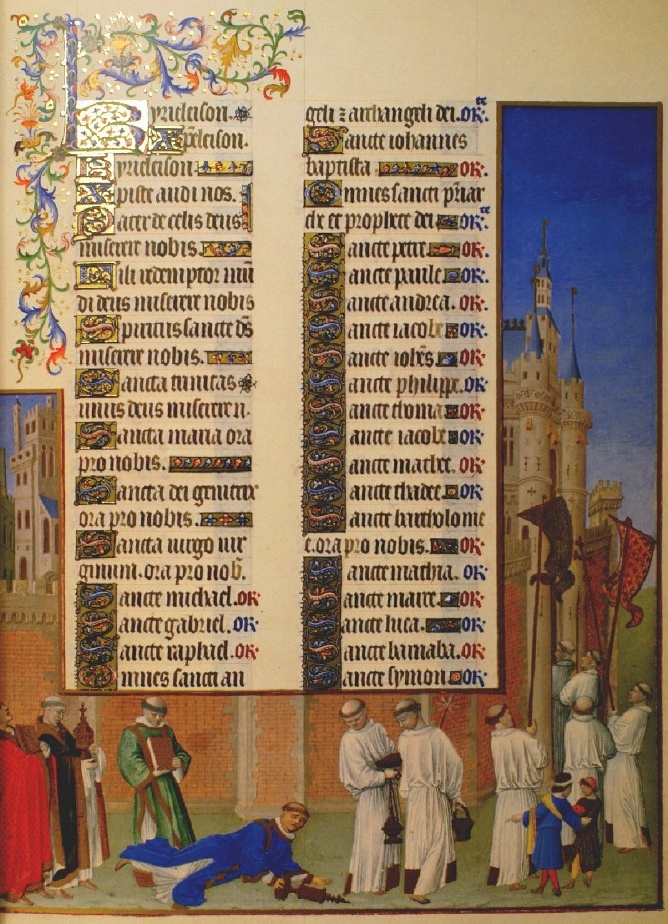 Everything about this manuscript, which was destined to be of the greatest importance to the future of painting in Western Europe, is impressive. There is its splendid array of color and form, its delightful clarity and color, as well as the enchantment and vitality of its illustrations. Not only the full-page miniatures but also the illuminated initials are works of art in themselves. 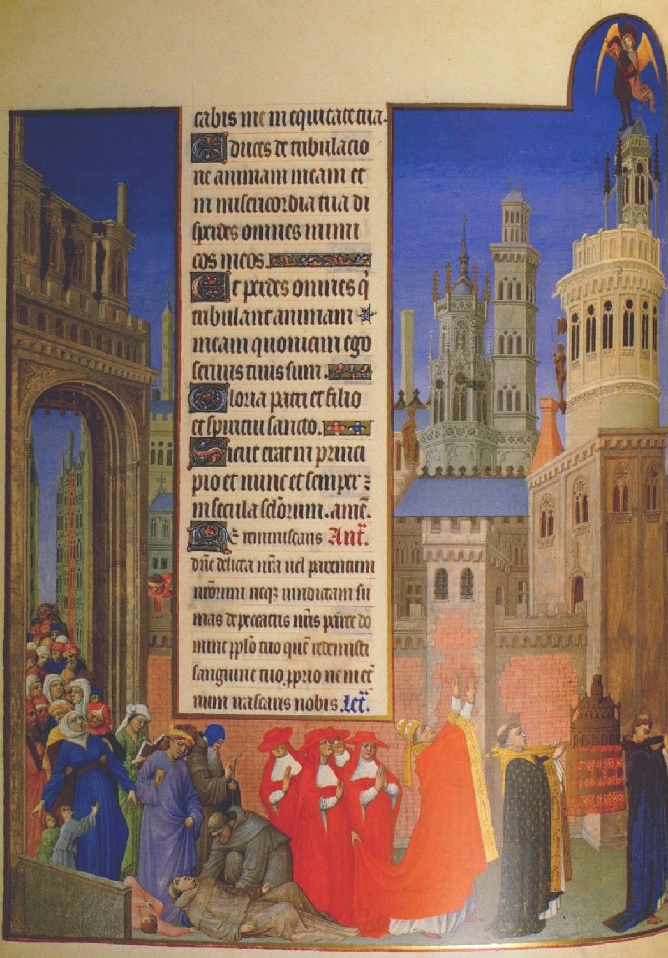 The overwhelming excellence of Les très riches heures du Duc de Berry has been acknowledged for centuries. Often called the crowning achievement of book illumination, this manuscript is even more - it is a milestone in the history of painting. 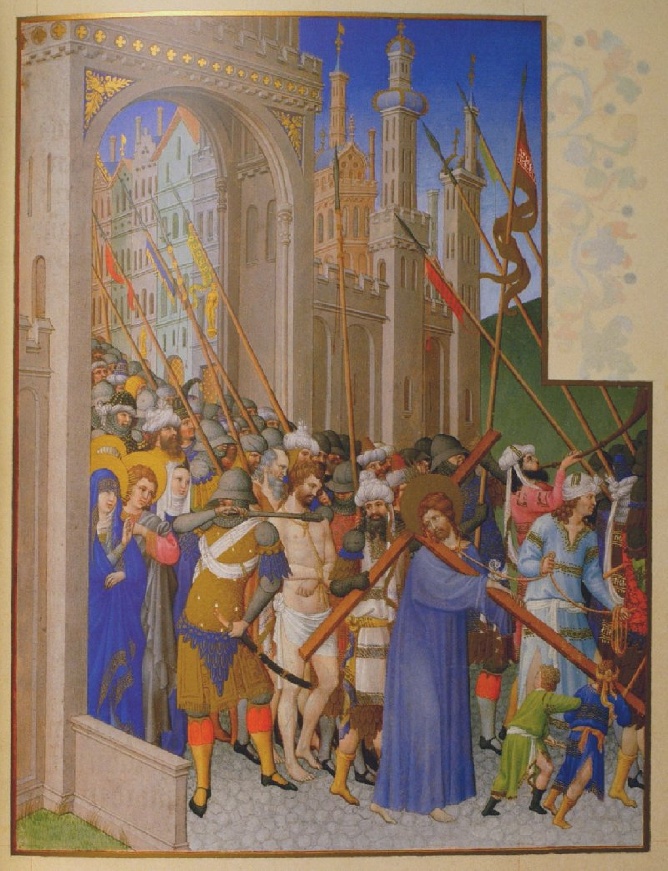