The Circus Collection consists of such a variety of elements as books, magazines, advertising posters and leaflets, photographs, pictorial cards of animals and circus people, and special illustrations. The father of the American Circus, Phineas T. Barnum, (1810-1891), is represented with a signed note, a cartoon, and two of his books. The intensely exciting, evolving whirligig world of the circus in nineteenth century America is vividly depicted in such magazines at Pluck and Luck, Brave and Bold, and Work and Win.

How the circuses loudly proclaimed themselves!: "Hagenbeck-Wallace Circus... The Highest Class Show on Earth"; "Bentley's 'Big' Vodvil and Dog Circus ... Positively Most Beautiful Troupe of Trained Dogs in the World"; "The Leviathan of Shows. Howes' Great London Circus and Grecian Hippodrome...". How, also, they blare the merits of their performers!: "Miss Kate Fisher, the Great Protean Actress and Daring Equestrienne!"; "Pennick the Expansionist, or Human Balloon"; and the "Flying Concellos. Peerless, Daring Artists of the Flying Trapeze".

Out west of the Mississippi, that legendary Western frontier of song and story, was theatrically brought to life by Buffalo Bill's Wild West Show. This Western version of circus entertainment popularized cowboys and Indians, stagecoaches and sharp-shooting, indelibly implanting these images onto the American consciousness and foreshadowing the movie Western.

Our Collection in this area gives a tantalizing flavor of these shows and their popularity. One 1893 "programme" booklet is entitled Buffalo Bill's Wild West and Congress of Rough Riders of the World. There are samples of Buffalo Bill tales of daring in such magazines as: Buffalo Bill Stories, Boys of New York, Beadle's Dime Library. New York, Beadle's Half Dime Library, and Beadle's Boy's Library of Sport, Story and Adventure. So readers, mostly young men and boys, poised on the edge of their seats over such thrilling tales as: "Adventures of Buffalo Bill from Boyhood to Manhood"; "Buffalo Bill's Rifle Shots, or, The Buckskin Bravo's Lone Trail"; "Buffalo Bill's Boy Mascot or Jack Jarvis' Hold-up, a Story of the Tenderfoot in the Wild West"; and "Gold Bullet Sport; or, The Knights of the Overland". Some stories, including the last named, are presented as written by the "Hon. Wm. F. Cody (Buffalo Bill)". Thus the legendary West was formulated, and later sustained, celebrated, and endlessly reformatted on movie screens throughout the 20th Century. Also, gunshots and hoof beats were heard from radios across America, and, of course, during the second half of the Century, came the sights and sounds of gunfights, stagecoach chases, and saloon brawls to families gathered before their television screens.

Thus the three rings of daredevil entertainment under the Big Tent and the out-of-doors devil-may-care action and drama of Western Americana are here united in one collection. Whether sawdust or sagebrush, ladies in tights standing on their horse's backs or cowpokes leaning from their saddles while lassoing varmints, acrobats balancing on the high wire or war-painted warriors chasing berserk stagecoaches, it's all one - "The Greatest Show on Earth"! 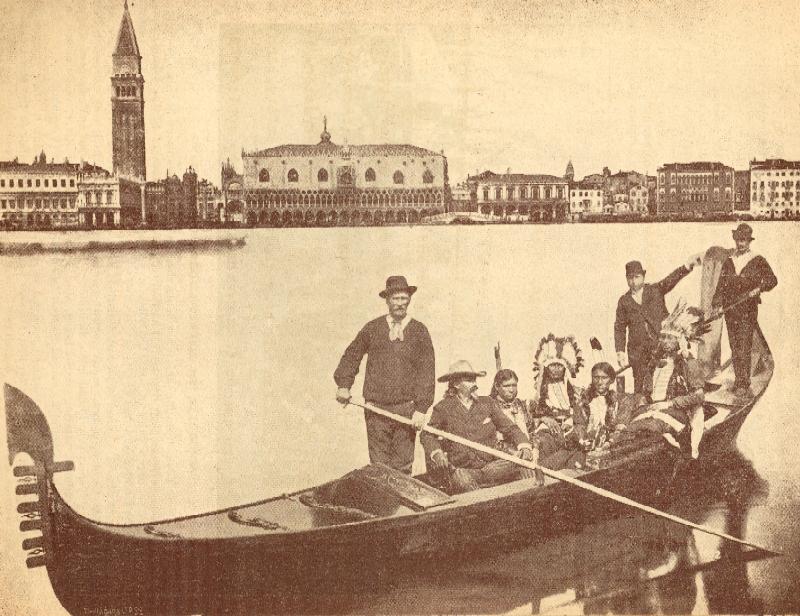