This last poem of Samuel Beckett's "Trois poèmes", he originally translated as follows:

First published in 1948, it was reprinted in Poems in English (Grove Press, 1963). Beckett inscribed the copy in our collection to his friend, the American writer Kay Boyle. However, she sent the book back to him and requested that he accurately translate the last line of his original French. Beckett then returned the book to Boyle, striking out his first translation and writing in a new one:

III.
I would like my love to die
and the rain to be falling on the graveyard
and on me walking the streets
mourning her who thought she loved me

Would this final change have occurred if Kay Boyle hadn't complained? In any case, LIU Post / Long Island University's Archives and Special Collections owns this initial change, in his own handwriting, which predates any publication. (Part of the Winthrop Palmer Collection of French and Irish Rare Books) 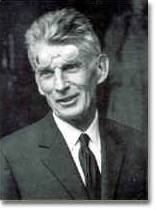