The LIU Post library offers faculty two wonderful video streaming collections, Kanopy and Films on Demand for classroom purposes only. Both of these services cover a vast range of subjects in many disciplines --the arts and humanities, social sciences, education, business and health sciences.

Kanopy offers a broad selection of over 26,000 documentaries, feature films, and training videos covering a variety of academic disciplines.

The collection includes a number of leading producers such as: Criterion Collection, New Day Films, The Great Courses, First Run Features, BBC, and many more.

The Request Form for Kanopy

Figure 1. Screenshot of a Kanopy request form, with "This film is not available at your library yet - don't be dismayed! 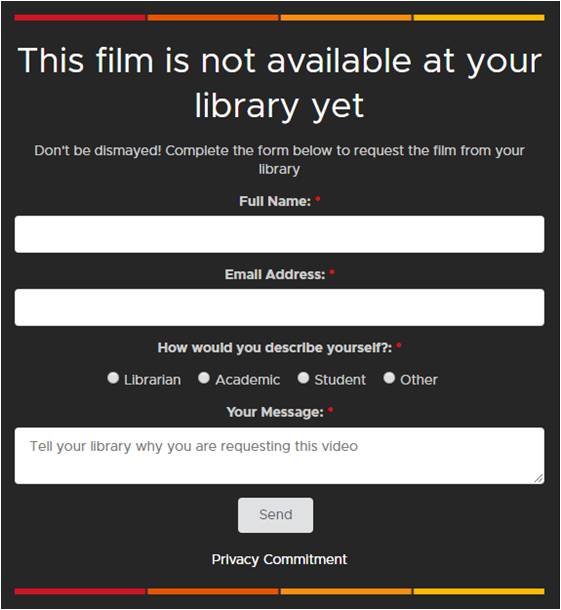 Complete the form below to request the film from your library." Fields for a full name and email address are also included, with buttons to select "How would you describe yourself" with options for "Librarian," "Academic," "Student," and "Other."

There is a blank text box for "Your Message" to tell your library why you are requesting this video. There is also a button to send the form, with a link to a privacy commitment.

What to include in the form:

The form will ask for your name, email address, and how you would describe yourself.  Instructors should select “Academic.”

In the message box please include the following information:

The request form from LIU Post faculty is sent to the media librarian at LIU Post Library – Maria.Zarycky@liu.edu

The request form for LIU Brooklyn faculty is sent to librarian at LIU Brooklyn Library – Patricia.Keogh@liu.edu

Films on Demand (FOD) is accessible to all LIU Post faculty and administrators. The database includes the Master Academic Collection, consisting of 25,208 documentary, educational and independent film titles. This video database has more than 700 distinct areas of study within more than 25 core subject areas designed to mirror the academic curriculum. Producers include: PBS, National Geographic, California Newsreel, Annenberg Lerner, TED, and others.

Dance in Video: Volume I

Dance in Video from Alexander Street Press contains streaming videos of dance productions and documentaries by the most influential performers and companies of the 20th century. Selections cover ballet, tap, jazz, contemporary, experimental, and improvisational dance, as well as forerunners of the forms and the pioneers of modern concert dance.

Theatre in Video is useful for teaching, learning, and research. While the texts of plays can serve as lasting documents, the productions are ephemeral; a live performance is gone when the curtain falls. And yet the collaborative elements of theatre in performance—the work of the actors, directors, and designers—have tremendous scholarly and educational value long after a production closes

A number of openly accessible Internet sites for streaming videos.

Database of and index to 5000+ full text, audio and video versions of public speeches, sermons, legal proceedings, lectures, debates, interviews, other recorded media events, and a declaration or two

Archive of American Television The Interviews: An Oral History of Television!

Founded in 1997, the Academy of Television Arts and Sciences Foundation's Archive of American Television has conducted hundreds of long-form videotaped interviews with the pioneers of television. The Archive’s vision is to chronicle electronic media history as it evolves and make the interviews available worldwide. New interviews are produced every year. Includes over 900 in-depth video conversations with key figures in television, both in front of and behind the camera.

The C-SPAN Video Library began in 1987 as a way to archive and index the thousands of hours of congressional coverage produced by the network every year. The project quickly became one of the most comprehensive video archives of governmental and political content.

FRONTLINE has served as American public television’s flagship public affairs series since 1983. Described by The Atlantic as “the best news program on television,” the series has built a reputation for powerful investigative storytelling that tackles the tough, controversial and complex stories that shape our times. More than 180 FRONTLINE documentaries are streaming in full online.

This library contains digital movies uploaded by Archive users which range from classic full-length films, to daily alternative news broadcasts, to cartoons and concerts. Many of these videos are available for free download.

Provides access to full-length films and television episodes, many in the public domain.  The alphabetic listing of titles links to the IMDB page that describes the film and provides a link to stream the video.  The link may redirect or pull the stream from another site such as the Internet Archive, SnagFilms, or Hulu

The Paramount Vault showcases a collection of Paramount full-length films and clips including selections that range from black-and-white to color, comedy to horror, and everything in between. Viewers are invited to explore the vast landscape of cinema’s history, share their favorite films, and discover new ones through this official channel created by Paramount Pictures.

PBS offers programming that expands the minds of children, documentaries that open up new worlds, non-commercialized news programs that keep citizens informed on world events and cultures, and programs that expose America to the worlds of music, theater, dance and art. It is a multi-platform media organization that serves Americans through television, mobile and connected devices, the web, in the classroom, and more.

YouTube is a video platform that's driven by two types of users: Video creators (people who have channels and upload videos to them) Video viewers (people who watch videos, interact with videos and subscribe to channels)