LibGuide for the Digital Initiatives and Art Image Library at LIU Post.

Objects from the Pre-Columbian Collection of the Steinberg Art Museum

y New York State Council on the Arts and New York Council for the Humanities, the Steinberg Art Museum (formerly Hillwood) and the library’s Digital Initiatives Department collaborated on developing a website that showcases selections from the museum's outstanding collection of Pre-Columbian Art. Learn more at the website.

With the support of the Cedar Swamp Historical Society, the Digital Initiatives department created a local history website highlighting the university's archival holdings. The collection is comprised of approximately 1100 items including a variety of important 18th and 19th century paper-based materials. Learn more at the website. 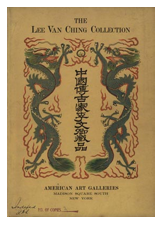 With funding from the New York State Regional Bibliographic Databases Program, as part of its support of the Metropolitan New York Library Council’s Digital Metro New York initiative, the digital catalog collection will be significantly expanded in 2013-2014 with a third phase entitled “Gilding the Gilded Age: Interior Decoration Tastes and Trends in New York City.” This project, launched in the spring 2014, brings together a group of late 19th and early 20th-century auction catalogs held at the Frick Art Reference Library and the William Randolph Hearst Archive at Long Island University Post campus. Learn more at the omeka exhibit.

Images and metadata from the Archive are uploaded to Digital Commons @ LIU periodically. You can access more information available at: http://digitalcommons.liu.edu/post_hearst/

The William Randolph Hearst Archive was given to Long Island University as a gift from the Hearst Corporation as part of a plan to develop an art archival division at the University. Materials donated include thousands of art sales catalogs, photographic records, architectural blueprints, drawings and correspondence.

Artstor Digital Library and the B. Davis Schwartz Memorial Library at Long Island University are collaborating to share approximately 2,000 images of items in the William Randolph Hearst Archive.

William Randolph Hearst (1863–1951) is best known today for his successful publishing and media dynasty, but he was also passionate about works of fine art and antiques and collected objects for more than seven decades. Mary Levkoff, Museum Director, Hearst Castle ®, described Hearst as a collector with a need for quality and a desire for quantity. “He loved to collect objects used to furnish his six main residences; filling them with art was his joy.”

In 1975, the entire collection of the William Randolph Hearst Archive, consisting of 125 albums that record the sheer monumentality and variety of art items acquired by Hearst, thousands of his art sales catalogues dating as early as 1884, and sundry materials in boxes and file cabinets, were transferred from the Hearst estate as a gift to Long Island University with the stipulation that they would not be sold. A recent reappraisal of the archive disclosed numerous primary documents that shed light on the opulence of the Gilded Age of which Hearst was a key player, his politics, and most remarkably, his lifelong unique approach to art collecting.