LibGuide for the Digital Initiatives and Art Image Library at LIU Post. 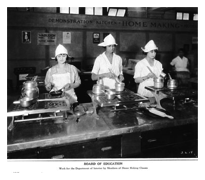 John F. Hylan, the mayor of New York 1918—1925, presented these two volumes to William Randolph Hearst. The volumes contain approximately 500 photographs documenting historical aspects of the City of New York and its progress during the first 25 years of the consolidation of its boroughs. Images include political figures, the state of civil service departments and the department of education, a glimpse at the status of New York’s women during the first quarter of the twentieth century and the Jubilee’s celebratory parade. 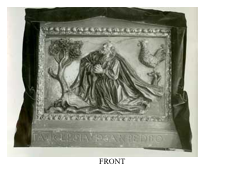 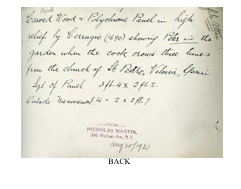 At least 1,500 documents including photographs, correspondence, notes, descriptions, drawings and blueprints, were housed in file cabinets in Hearst’s Bronx NY warehouse. Hearst’s simple system A-Z has been maintained during the transfer of these objects to archival storage. Documents reference every conceivable category of art from altars to tapestry. Different levels of information to develop metadata and provenance accompany all the objects. These objects, unlike other objects in the collection, are of major interest to researchers because they have remained a hidden portion of the archive. Some examples include blueprints and photographs of an Istrian balcony now installed at Hearst Castle, San Simeon California and architectural plans of Santa Maria de Ovila, a 12th century Cistercian monastery now reconstructed in Vina, California.

160 albums are regarded as fundamental to the archive because scholars utilize them as research tools and in scholarly publications. The majority of them contain a table of contents listing the items recorded within. In most cases, records contain a photograph, description, known provenance, purchase price, shipping destination, and subsequent sale. The albums document the variety of media collected by Hearst.

Approximately 10,000 sales catalogs formerly owned by Hearst reveal critical information about his approach to collecting and dealing in the arts. Art sales catalogs are considered a unique tool for several types of research, both art historical and non-art historical. The catalogs provide a range of domestic and international art auction houses, trends in artistic taste, and clues into a Hearst’s unique style of collecting. Many catalogs contain Hearst’s annotations and correspondence from Hearst, his art dealers and associates including Laurence O’Reilly, Joseph Willicombe, Chris Mac Gregor, Arnold Seligmann, Gerard D’Aquin and William Permain.

A selection of Hearst Catalogs are available through an Internet Archive Search at: https://archive.org/details/liupost.